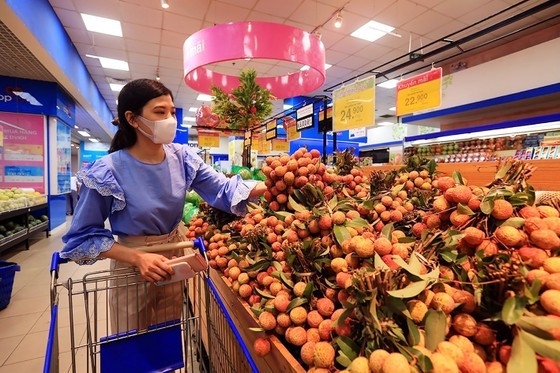 This is a result of the efforts by the Vietnamese Consulate General in San Francisco in bringing Vietnamese products to foreign distribution systems that started from early this year.

According to the Asia-America Market Department under the Ministry of Industry and Trade, this is a giant step forward in promoting the sale of Vietnamese fruits in general and litchi in particular in the US market, as the majority of Vietnamese fruits have been sold in only small markets and super markets to serve Asian consumers.

A representative from US Dragonberry Produce, the distributor of Vietnamese litchi in the US, said that two other containers of litchi are also on their way to the US. The fruit will continue to be sold in the two supermarket chains with a price tag of US$4.99 for each bag of 430 grams.

The representative said that the firm has taken steps to introduce the fruit to local partners and consumers.

It piloted the marketing of Vietnamese litchi in early May during the San Francisco trade, investment and tourism promotion conference which was attended by Prime Minister Pham Minh Chinh. The company then imported litchi by air to sell in Los Angeles supermarkets.

The high air transport cost made Vietnamese litchi less competitive in the market. This is the reason why the export of litchi to the US has been modest while the fruit has been accepted in the market since 2014.
Therefore, Dragonberry decided to transport litchi by sea and succeeded, which is expected to strongly increase the export of Vietnamese litchi to the US in the time to come.
Source: https://m.sggpnews.org.vn/business/big-step-for-vietnamese-fruits-towards-us-market-100893.html
Search
Recent Posts